Example:
A car travels from a stationary position and reach a velocity of 36 ms-1 in 8 seconds. What is the acceleration of the car?
Answer: 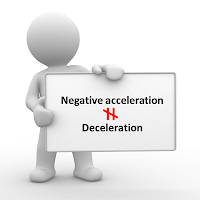