[This image is original released under GNU Free Documentation license ]

What is the transformer?

A transformer is a device that is used to raise or lower down the potential difference of an alternating current.

The function of a transformer is to increase or decrease the potential difference of an alternating current supply.

1. A transformer consist of 3 parts, namely [This image is released under the GNU Free Documentation License.]

Working Principle of A Transformer

Types of Current in A Transformer

Symbol of A Transformer 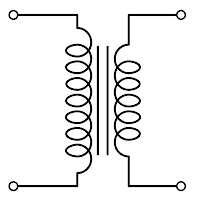 The figure on the left shows the symbol of a transformer. The 2 lines in between the coil denote the core.