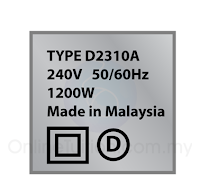 Example
A bulb rated 240V/80W is operated from a 120V power source. Find the resistance and the current flows through it.

The current flows through the bulb

Calculating the cost of electricity consumption

Example:
If TNB charges 22 cents for each kWh of electrical energy used, calculate the total cost of using a 2kW electric kettle for 15 minutes and a 20 W filament bulb for 8 hours.

Electrical energy consumed by the bulb,